August 11, 2011
American Born Chinese by Gene Luen Yang was the last book I read for the 48 Hour Book Challenge last week.  I loved it when I read it and the more I have thought about it since, the more I've loved it.  It is one of those books that gives you a lot of food for thought. 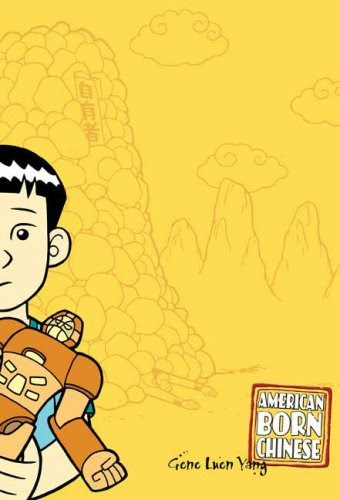 Let's start with the cover.  Look at that little boy with his bewildered expression clutching his transformer.  Don't you just want to hug him?  I do.

Synopsis (From Goodreads):
A tour-de-force by rising indy comics star Gene Yang, American Born Chinese tells the story of three apparently unrelated characters: Jin Wang, who moves to a new neighborhood with his family only to discover that he’s the only Chinese-American student at his new school; the powerful Monkey King, subject of one of the oldest and greatest Chinese fables; and Chin-Kee, a personification of the ultimate negative Chinese stereotype, who is ruining his cousin Danny’s life with his yearly visits. Their lives and stories come together with an unexpected twist in this action-packed modern fable. American Born Chinese is an amazing ride, all the way up to the astonishing climax.

American Born Chinese is a graphic novel and the story would not work as beautifully as it does in any other format.  The illustrations are essential to the story.  Yang brilliantly moves the story with a character's facial expression and body language.  The more I ruminate on this book the more brilliant I find what he has done here (hence my growing love).  Whatever I say can't express how layered with meaning it is.  To have accomplished that with sparse words and pictures shows Yang to be a master of his art.

You can probably tell by the title and synopsis that this is a story about cultural identity.  There are three separate stories that combine in the end.  Jin is Chinese but he is also American and he feels the pull between the two keenly.  It makes him feel not wholly Chinese and not wholly American.  He has two friends, also Asian Americans, and they don't really fit with the rest of their classmates and have racial slurs tossed at them.  Paralleling this is the character of Chin-Kee in the middle story, an embodiment of every Chinese stereotype and joke out there.  Yang drew him with big buck teeth, slits for eyes, and a a long braid down his back. He has him switching his r's and l's, wanting to bind the feet of pretty girls, answering all the questions in class correctly, and eating "clispy flied cat gizzards wiff noodle" for lunch.  At one point Chin-Kee breaks out in a rendition of "She Bangs" on a table in the library that is very reminiscent of William Hung's American Idol audition.

This isn't  just a story about finding your cultural identity as an immigrant though.  Nor is it only about the cruel absurdity of cultural jokes and stereotypes.  It is at heart a story about embracing who you are and who you were created to be.  The third story in the book stars The Monkey King, a character from classical Chinese literature, born of a rock.  He attains powers by attaining the four major disciplines (from Taoism) and no longer wishes to be a monkey.  That is when he is visited Tze-Yo-Tzuh, "he who was and is and shall forever be", who tells the Monkey King that he was created a monkey and better learn to accept it. During this encounter Tze-Yo-Tzuh's speech is taken from Psalm 139, which is all about the unique and specific way an individual is created by God.  Why Yang chose that text and that specific phrase to describe Tze-Yo-Tzuh interests me greatly.  It is another melding of east and west, like Jin is himself.  I don't think it is meant to be taken as wholly symbolic.  It's still exercising my brain.

These three stories come together in the end in a wonderful twist that raises some other interesting questions and discussion points that I can't mention without spoiling the end.  There's lots to think and talk about here which always makes a book better.

I would be remiss if I didn't also mention that the entire book is hilarious and has a sarcastic, tongue in cheek tone that I, of course, adored.