I wanted to read Kat Incorrigible by Stephanie Burgis since I learned it was being released in England under the title A Most Improper Magic. As the US release date finally drew near I pre-ordered it and then devoured it as soon as it arrived.  The cover and title of the book greatly intrigued Bit who begged me to read it to her.  I waited to review it until I had done that so I could let her have her say and I could also comment on how it worked as a read aloud. 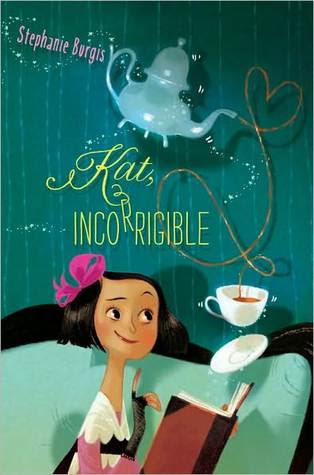 The StoryKat Stehpenson is not a proper young lady. She climbs trees. She speaks her mind. She fights. She doesn't see why a girl can't set out to seek her fortune like a boy and so cuts off her hair and goes out to do just that. The only thing standing in her way are her sisters. Elissa, super proper and yearning to play the role of gothic heroine, and Angeline, shrewd and haughty with a rather  large rebellious streak of her own, try and keep her in line.  Kat also has a rigorous opinionated Stepmama to deal with.  As the family fortunes are low, and both Kat's sisters need to make good matches, the family travels to a house party at Grantham Abbey where Kat finds herself up against some formidable foes.  Because Kat has been keeping secrets.  Secrets that involve her and her real mother's scandalous magical legacy. Kat has to be on her guard and use all of her wits to save her family and help her sisters find suitable husbands.

Bit's Thoghts
I  like this book almost as much as Harry Potter as it has two things in common, it's magic and British.  I like that Kat is smart and thinks fast when she's in trouble. I think Sir Neville was a very bad villain. He was scary. I like what Kat was able to do for her sisters. I'm looking forward to the next book.

My Thoughts
Regency England with magic. How could I pass that up?  My anticipation was well rewarded with this book, which was just as fun the second time I read it as the first.  Kat is a heroine that modern girls can very much identify with.  Her family struggles also make her identifiable. As the younger sibling she is always being lectured at, restrained, and told she can't possibly understand.  Kat is smart and uses her wits well despite being often frustrated by her older sisters.  The sisters themselves are interesting characters.  Elissa is a humorous picture of a girl who has read too many gothic romances and longs to be like a heroine of one. She behaves rather ridiculously at times as a result.  It is amusing, as are Kat's reactions to them.  Angeline is less likable. She thinks quite a lot of herself and is disdainful of those around her, most especially her younger sister. Despite this she comes through to help Kat save Elissa in the end. I really enjoyed this picture of sisterly love and devotion.  It is very true to life.  Sisters don't always get along, and sometimes don't even like each other, but the bond that is there causes them to stick with each other against the rest of the world. The Regency world is a familiar one to any who have knowledge of the period.  Because it is a historical fantasy the author was able to get away with a little more than would have been truly acceptable for the time period, but you can certainly tell Burgis knows her subject matter well.  The story's villain, while quite predictable and stereotypical, was exactly as evil and smarmy as is required for this type of story.

So, how does it work as a read aloud?  It worked better than I was expecting it to.  There are some sentences, given the language conventions of the time period, that are certainly a mouthful and left me gasping for air at the end of them.  The action in the story is paced perfectly to keep this interesting for a listener and many chapters are cliff hangers enough to have them begging for more.  I will say that this won't work for just any listener. Bit has been has exposed to Jane Austen via the BBC version of Pride and Prejudice so she was familiar with the waters we were wading into.  I don't think the story would work as well read to a first grader who had no concept of the time period at all.

Kat Incorrigible is delightfully fun and I am very much looking forward to the sequel, Renegade Magic, when it is released in the US next spring.  It will be released in the UK in August under the title A Tangle of Magics.