August 07, 2011
Actually it is a good read at anytime of the year.  I like reading it at Christmas because my favorite scene in the book occurs at a Christmas dinner involving a clever British soldier, his equally clever Patriot captive and a well placed glass of drugged wine.  The Sherwood Ring is one of my all time favorite books but if  all I had known about this book was its premise I probably would have disregarded it as silly and never read it.  But it was written by Elizabeth Marie Pope, who wrote The Perilous Gard (my review), and so I gave it a chance. 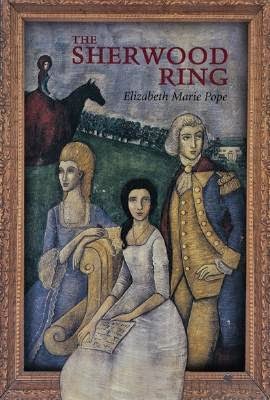 The book is about a girl named Peggy who has just been orphaned and comes to live with her uncle at her family's ancestral estate in upstate New York. During her first meeting with her uncle he loses his temper and kicks out a perfectly nice young man who has assisted Peggy in reaching her home. After this less than auspicious beginning Peggy is promptly ignored and becomes lonely as she wanders about with no direction or companions. Into this loneliness enter four ghosts from her family's past from the time of the Revolutionary War. As they share their stories Peggy's present situation begins to take on new and interesting forms.

I usually don't go in for ghost stories but this one is just done so well.  It is the Revolutionary Era story that made me love the book.  And, to be more specific, the character of Peaceable Sherwood is what keeps me coming back for repeated readings.  Intelligent, sneaky, sarcastic, stubborn, he is everything I love in a hero. The historical setting is genuine and interesting. It makes the reader think of the Revolutionary War in terms of the lives living it rather than the battles and dates that have historically marked it.

If you enjoy good historical fiction than you would probably enjoy this whether or not ghost stories appeal to you.

I am rereading it in snatches of time today in between decorating cookies, baking cakes and trying to keep my children from driving their auntie crazy.