August 11, 2011
I have been able to read less since my last post than I would have liked.  It turns out  I needed some sleep after all.  Go figure.  Then I needed to act like a mature and responsible adult and take the car for its maintenance. Except not really because I complained quite a lot.  A little fact about me:


So we had to get breakfast after dropping the car off at the dealership. (Or as Destructo-boy was saying all the way there, "We're going to the pirate ship." He was a bit disappointed to discover this was not actually the case.)  In between all that and then picking the car back up I was able to get some reading done and finished the last three of the Casson Family books.  I had read and reviewed Saffy's Angel two months ago and loved it.  I  have now completed the whole series and am happy to say the Casson children have secured a permanent place in my heart.  As have Sarah, Michael, Tom and David. I am including my review for the second book in this too since I had not posted one. 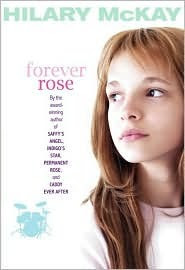 "Oh, you Cassons are so artistic and dysfunctional and cool, it's not fair."-Sarah (Permanent Rose)
Indigo's Star:    There is a lot going on in this novel and many characters, but McKay juggled it well.  It is never too much.  All of the Cassons, Sarah, and Michael are back in this volume.  Tom, a new character, joins the melee'.  He is a friend of both and Indigo and Rose, who has family issues of his own.  Rose rather annoyed me in the first book, but it in this one I enjoyed her more.  I wanted to scoop her up and hug her.  I also wanted to throttle the parents at several points (a recurring theme).  My favorite part of this book was Indigo though.  It was wonderful watching him grow and stretch himself.  This did seem to be more of a Rose story overall though.

Permanent Rose:    Speaking of wanting to hug Rose and throttle parents...Eve's obliviousness to her children irks me.  I don't like to smother my kids, but I do not find remembering to feed them to be a particular challenge.  I would like to think I would notice if my 8 year turned to a life of crime.  And I hated Bill by the end.  These kids are plucky though and they have each other.  And they have Sarah. They also get another new addition in the form of David, recently reformed bully.  Despite how I want to cringe at the lackadaisical parenting, I love that these books show how messy wonderful family is in all it's complexities.

Caddy Ever After:   Rose somewhere along the way completely took over apparently.  Really all four of these books are all about Rose, even though Indigo and Caddy get their names mentioned in two of the titles.  Caddy is actually the Casson represented the least in this volume.  I did like the format though.  It made for a somewhat disjointed narrative, but the switch to first person and having each kid narrate a different section really made their personalities stand out.  I found each part to distinct and individual, sounding genuine to the characters I've come to know.  Caddy's part is as ditsy and scatterbrained as she is.  Rose's parts (she gets two) sound much younger than the others and her observations are delightful.  I love her childhood assurance that she is so wise while at the same time demonstrating she has so much to learn.  Saffy continues to be remote, even in first person, but is smart and wonderful.  I loved watching her weather a difficult time with Sarah.  Which brings me to Indigo, who, this book cemented it, is my absolute favorite.  He is awesome.  One of those silent lazy types you need to watch out for because when they are only silent and lazy until they want something.  And his date for the Valentine's Disco?  Did not imagine that would happen, but I liked it and would have liked to see more come of it.

Forever Rose:  So this might be mainly due to my reading the last three of these in one day, but I was pretty much over Rose by this point.  This book is told first person by her so there was no escaping her.  I really like how McKay has developed her character through the course of the books.  In many ways she has grown  and changed, in some ways I felt like she regressed to the Rose of Indigo's Star in this volume.  Which is understandable as her family is changing in major ways.  Her siblings are all grown up and she is often on her own.  I may have liked it more if it had been third person like the other ones.  Also, Indigo and Saffy are my favorites and I missed them.  I realize they are older in this one but I feel cheated.  Also I still hate (yes, the bold is necessary) Bill and everything he stands for and think he got off waaaay to lightly.