August 11, 2011
On the cover of Fly by Night by Frances Hardinge there is a banner that reads: "Imagine a world in which all books have been BANNED!" I left the book on the table one day and Bit found it. Probably intrigued by the girl and her goose on the cover she picked it up and read this aloud. She slammed it back down and said, "I don't want to imagine that world, I would hate that world." Which is, of course, the point, but she's too young to appreciate that. 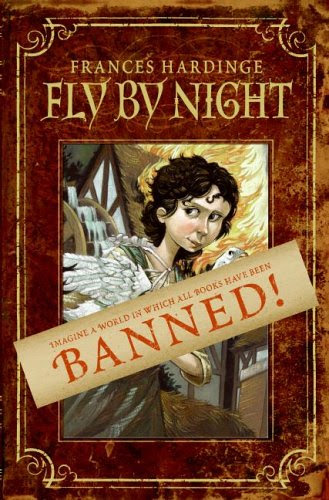 Fly by Night has a very Dickensian feel to it. Mosca Mye is a clever orphan with an instinct for survival and she has to survive in a world of shady adults and dangers. Adults with names like Eponymous Clent, Linden Kohlrabi, Lady Tamarind and Captain Blythe. This book is a word lovers delight. Hardinge plays with names and is a master of figurative language. The descriptions in the book bring the world of The Fractured Realm to life. The realm is a fully realized one with a detailed history that is revealed in clever turns of phrase and dropped hints. The artistry of this is important because it is, essentially, a book about the power of words.
"Words were dangerous when loosed. They were more powerful than cannon and more unpredictable than storms. They could turn men's heads inside out and warp their destinies. They could pick up kingdoms and shake them until they rattled. And this was a good thing, a wonderful thing."
Hardinge has such a way with words it is easy to forgive her for the sometimes ridiculous twists the plot takes. It all fits in with the quirky world and characters she has created. One small quibble I had with Mosca was that she sounded like a street urchin. I find it hard to believe with everything you discover about Quillam Mye that he would have allowed his daughter to talk in such ways. She was educated by him and lived with him until she was 8, her speech patterns would have already  been set and they certainly wouldn't have devolved so greatly over four years working as a bookkeeper in her uncle's mill. That being said, Mosca does think like a genuine 12 year old. She makes impulsive decisions and jumps to conclusions that are very natural for a 12 year old mind.

The book says for ages 10 and up and I think that is a good suggestion to go by. There is a very sinister feel to the book and it explores many themes most younger readers simply lack the maturity and critical thinking skills to understand. It tackles the dark side of politics, economics, crime war and social unrest. The religion of the Realm is also explored in detail as is Mosca's response to it. There is a very definite condescending atheism that develops in Mosca by the end that would make for an interesting discussion.

I really thought the book wrapped up well in the end. I was surprised because I knew going in there was a sequel, but you could read just this one volume and have a complete story. Depending on where you live the sequel is called Twilight Robbery (UK) or Fly Trap (US). Guess which version has the better cover?