August 07, 2011
I have a new literary infatuation.  Christopher Chant has stolen a piece of my heart.  Thanks to Charlotte at Charlotte's Library , who made him sound so interesting in the battle she wrote for the YA Fantasy Showdown, I decided to read the Chrestomanci Chronicles as my next Diana Wynne Jones.  Charlotte suggested I start with Charmed Life and this is what I have done.  I recommend anyone reading these books for the first time do the same.

The first two books are: 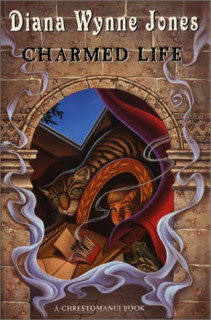 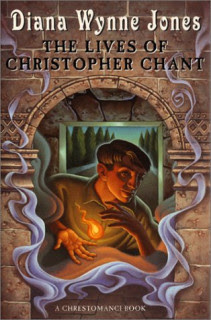 You can get them combined in one edition as well:

From Goodreads:
In this multiple parallel universes of the Twelve Related Worlds, only an enchanter with nine lives is powerful enough to control the rampant misuse of magic--and to hold the title Chrestomanci...

The world building in these books is extraordinary.  The Twelve Related Worlds are complex making them fascinating, but the way they are introduced layer after layer makes them easy to understand.  I appreciate the way Diana Wynne  Jones never condescends to her readers.  She does not insult your intelligence by explaining everything in tedious detail.  Information is given like pieces in a puzzle and the picture becomes clearer the farther in you get.

Charmed Life tells the story of Eric "Cat" Chant.  He is an orphan who is completely useless at magic but his sister Gwendolen is a powerful witch.  When a distant relation bearing the title of Chrestomanci takes an interest in them and moves them to his castle with his family things become very interesting and upsetting for Cat.  His sister is angered by Chrestomanci's disregard for her magical talent and an angry Gwendolen is a dangerous person to have around.  Cat becomes more miserable as his sister tries to prove to Chrestomanci she is someone to be reckoned with.  As events unfold Cat is forced to discover his own magic and learns that he and their frightening host share a common power and destiny.

I was really annoyed with Cat for most of this book.  He is passive and lets Gwendolen, who is horrid in every way, run all over him.  But then he can't be completely blamed for this as the relationship is really an abusive one and he is very young.  Gwendolen controls him and he worships  her despite knowing she is a despicable person.  It was the supporting cast of characters of The Family that made me fall in love with the world.  The humor and wit infused in everything they were doing around Cat and Gwendolen made the book.  It was really a great introduction to the world and characters.  At the end I knew I wanted to know more about them, particularly Millie and , of course, Chrestomanci himself.   He was intriguing from his first scene in the book and he took over every time he appeared.  Then there was this delightful confrontation between him and Gwendolen:

Gwendolen stared at him.  "You mean you did it?  You read a letter addressed to me?"     Chrestomanci nodded blandly.  "Naturally.  If someone like Henry Nostrum writes letters to you , I have to make sure he's not writing anything unsuitable.  He's a very seedy person."     "He was my teacher!"  Gwendolen said furiously.  "You've no right to!"     "It's a pity," said Chrestomanci, "that you were taught by a hedge wizard.  You'll have to unlearn such a lot.  And it's a pity too that I've no right to open your letters.  I hope you don't get many, or my conscience will give me no peace."     "You intend to go on?" Gwendolen said.  "Then watch out.  I warn you!"     "That is very considerate of you," said Chrestomanci.  "I like to be warned."

Oh, the snobbery, snark and disdain combined in perfect measure.  Not to mention the style exhibited in what he is wearing at the time.  This is where Christopher Chant officially won my heart.

The Lives of Christopher Chant takes place 25 years before the action in Charmed Life and is the story of how Christopher Chant came to realize his destiny as the future Chrestomanci.  Despite the fact that the action of this story takes place first chronologically, Charmed Life should be read first.  This book is my favorite of the two and is actually my favorite DWJ yet.  After all, it is all about Christopher who, even as a child, had the perfect blend of snobbery, snark and clever disdain.  As a fan of anti-heroes I also appreciated Christopher's flirtation with the dark side.  He makes the perfect Chrestomanci because he has seen up close the seedy side of the magical underworld.  And then there was Millie.  I knew from Charmed Life she was fascinating and powerful in her own right but oh my goodness, her story was even greater than I expected.

I definitely will be finishing the series as soon as possible.