August 11, 2011
If you were a child of the 80's (or just like good fun movies), you have probably seen The Goonies.  Do you remember that scene where they find themselves in the bottom of the well and they start scooping up the coins and Mikey stops them and tells them they can't take it because they would be stealing people's wishes?  Ever think Mikey was cute but just a bit sentimental?  Well, the main characters of Well Witched by Francis Hardinge could have used someone with that much sentiment and power of conviction with them when they decided a wishing well was a great place to procure bus fare.  Unfortunately for them they learn the hard way that stealing other people's wishes is no small thing.

The left is the cover/title of the (original)  UK edition, the US edition is on the right: 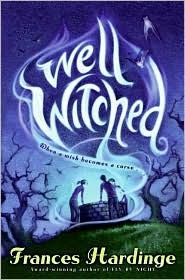 Summary (from Goodreads):
Ryan and his friends don't think twice about stealing some money from a wishing well. After all, who's really going to miss a few tarnished coins?   The well witch does.  And she demands payback: Now Ryan, Josh, and Chelle must serve her . . . and the wishes that lie rotting at the bottom of her well. Each takes on powers they didn't ask for and don't want. Ryan grows strange bumps—are they eyes?—between his knuckles; Chelle starts speaking the secrets of strangers, no matter how awful and bloody; and Josh can suddenly—inexplicably—grant even the darkest of wishes, the kind of wishes that should never come true.

Well Witched is a complex and dark story.  Very dark.  The writing is superb and there is a lot about the story that I liked even though I didn't truly enjoy reading it.

I really like Hardinge's style of writing.  It is descriptive and beautiful without bogging down the plot.  She can evoke multiple emotions with her words.  The plot of this book is layered and many themes are explored.  Themes such as friendship. family obligation and devotion, abandonment, loss, and the secret heart at the center of every wish.

The story is told in third person from Ryan's perspective.  I really liked Ryan as a main character.  He is not at all the heroic type but he rises to the occasion when it becomes necessary.  All three children are portrayed as complex and layered individuals.  The other two seem a little flat in the beginning of the novel because Ryan doesn't see them as all they are.  As his eyes are opened (in more ways than one) to, not only his friends true natures, but also his own, all of them very much come to life.

I appreciated how this novel differed from many others in the MG fantasy genre.  This book, like many MG fantasies, has a trio of friends confronted with the unexpected.  Hardinge adds her own disturbing twist to this (as an adult I knew where it was going to go from the beginning, but I imagine that a young reader, used to the way this typically plays out, might be caught off guard).  The friendship between Ryan, Chelle and Josh is not balanced, and it is not a healthy one.  Tough situations can reveal the true nature of people and their loyalties and those revelations are not always pleasant.  Hardinge addresses this head on.  Another place this diverges from typical fantasy is that all these kids have parents.  Parents who are not dead, mysteriously absent, or being held hostage by evil forces.  Two of the kids even have parents who care about them enough to inquire into their well being and notice when things are awry and want to protect them.  One of those kids is Ryan.  That's right.  A main character in a fantasy novel has loving parents who notice something amiss and are concerned for his welfare.  It can be done.

So why didn't I enjoy it?  It took me three days to finish (odd for me with a book like this) because I was haunted by a feeling of disquiet the whole time I was reading.  Which is a testament to the talent in the writing, but it was so intense at times I didn't want to continue.  I don't want to give away spoilers so I won't say too much other than some of the people in this book are seriously troubled.  Not magically troubled either.  Life troubled.  I also had trouble with the resolution.  This is completely subjective and due to the lens through which I view the world.  I can not swallow that I'm supposed to feel sorry for someone who compels people to acts of extreme violence and evil.  The way the end was written  I feel that was the author's intent and that bothers me.

If you are looking for a well written fantasy with a good story for the young person in your life (or yourself) this certainly fills the requirements.