August 11, 2011
I can't tell you how many online discussions of The Cardturner I've read in which someone has stated, "I just don't think kids will enjoy reading a book about Bridge."  That does this novel (not to mention teen readers) a huge disservice.  This is not a book about Bridge.  It is a book about life.  The people who are living life in this book happen to play Bridge.  It's not actually quite that simple though.  Because Bridge is anything but simple.  Kind of like life.  Which is why this novel is so absolutely brilliant. 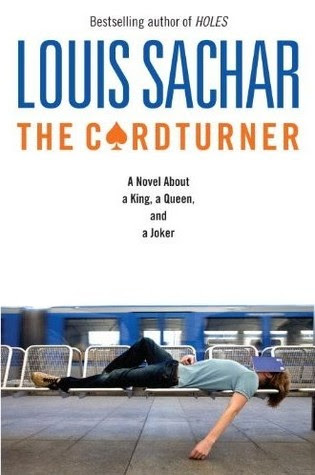 Synopsis (from Goodreads):
When Alton's ageing, blind uncle asks him to attend bridge games with him, he agrees. After all, it's better than a crappy summer job in the local shopping mall, and Alton's mother thinks it might secure their way to a good inheritance sometime in the future. But, like all apparently casual choices in any of Louis Sachar's wonderful books, this choice soon turns out to be a lot more complex than Alton could ever have imagined. As his relationship with his uncle develops, and he meets the very attractive Toni, deeply buried secrets are uncovered and a romance that spans decades is finally brought to a conclusion. Alton's mother is in for a surprise!

Alton is an unapologetic loser at the beginning of this novel.  He gets played all the time, particularly by his best friend.  I seriously wanted to reach in the book and shake him at times.  I felt for him though and I loved his voice, which sounds authentically like a teen boy.  He is insecure, apathetic, a little clueless and rebellious in a passive aggressive way.  He is also clever and funny.  (Hmmm...a lazy but smart hero with a passive aggressive streak and a sense of humor.  Not surprising I liked him so much.)  His uncle really becomes his mentor but neither one of them acknowledges this.  Alton learns to play far more than Bridge by the time the book is finished.

Trapp, Alton's uncle, is wonderfully rendered.  Blind and rich, the only real passion in his life is Bridge.  But it is not his only love.  He is surly and a bit bitter from some of life's experiences but he is also philosophical and generous.  He doesn't like being played.  I liked that Sachar didn't fall into writing, "the cantankerous old codger who learns to love" trope.  Trapp is not Scrooge and Alton is not Tiny Tim.  Their characters and relationship are far more complex than that.

"The time you quit learning is the time to quit playing."
When I said this is not a book about Bridge that didn't mean there isn't a whole lot of Bridge in it.  There is.  The game is almost a character itself.  It is a metaphor for life and in the hands of a lesser author it could have been disastrous.  But this author is Louis Sachar, so it wasn't.  What Sachar does with the metaphor was brilliant and he did it with a light touch.  Not many people know a lot about Bridge and Sachar acknowledges the difficulty of this.  Alton mentions how when he read Moby Dick he was drawn into the story until it became all about the technical aspects of whale ships.  So whenever technical aspects of Bridge come up he puts a little whale on the page so you know you can skip that part (but don't because there is good stuff in there).  Can you read and appreciate this book and know nothing about Bridge?  Absolutely yes.  I sure didn't know anything about Bridge when I started reading it.*

So yes, in a way it is a story about Bridge.  But it is also a story about lost dreams, love, relationship, generosity of spirit and the never ending pursuit of knowledge.

The subtitle for the book is "A Novel About a King, a Queen, and a Joker".  Who is the King?  Who is the Queen?  Who is the Joker?  There are actually several possible answers to all three questions.  I'm not sure which ones are the ones Sachar intended.  Which is probably what he actually intended.

*I did play Spades with my roommates in college all the time.  Now Spades is to Bridge what splashing in a wading pool is to swimming in a meet but it might have given me a slight edge.