August 11, 2011
"A  thief is a lot like a wizard."  "A wizard is a lot like a thief."  These are the opening lines of the first and third books in The Magic Thief series by Sarah Prineas.  These sage words are voiced by the main character, Conn, and he should know ,as he is both thief and wizard.  Yes, thievery and magic combined.  Who wouldn't love these books?  Hmmm....well, I can think of a few people who don't like either of those things separately, never mind combining them.  Who cares about those people though?  These books were definitely my kind of fun. 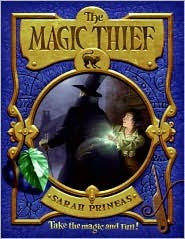 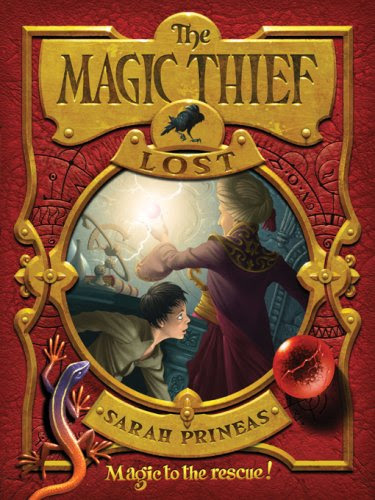 Conn is a gutter rat living on the streets of the Twilight side of Wellmet.  That is until the day he tries tom steal the Wizard Nevery's locus magicalicus.  When Conn doesn't immediately drop dead Nevery's interest is peaked.  He takes Conn on as servant (or apprentice, depending on the point of view).  It becomes clear that Conn has a special affinity with the city's magic.  the magic is being threatened and it wants Conn to help it.  In order to do this Conn has to go up against curmudgeonly magisters, a haughty duchess. a stubborn guard captain, threatening minions of the Underlord, and an evil preying on the magic of Wellmet.  Fortunately, Conn has allies in Nevery, the hired muscle,Benet, the Duchess's daughter, Rowan , and others who come from some surprising places.

Conn is a hero that you want to cheer for.  He is incredibly stubborn and will not budge an inch when he feels he is right about something.  Despite understanding the reasons others would try to reign him in, I found myself getting angry at characters who wouldn't get out of his way or listen to him.  Conn doesn't waste time trying to convince people he's right.  He simply moves forward with the confidence that they will come to their senses eventually and, until then, he will do what needs to be done.  The moment he discovers that he might fail because of their unbelief his heart-wrenching.  And me want to yell a lot at people in the book.

The books also come with a cast of supporting characters that are endearing and frustrating (sometimes one or the other,sometimes at the same time).Nevery and Benet are wonderful in the way they nurture, teach and support Conn.  The three of them form a family relationship that is interesting and unique.  Rowan is Conn's best friend and is intelligent, knows how to use a sword, and supportive and protective of her impulsive young friend.  At the end of the third book I didn't want to leave these characters behind.

For me, the most intriguing element of the books is the nature of the magics that sustain the cities in the world Prineas created.  This is a mystery slowly unraveled as the story unfolds.  Conn has definite ideas about this and the main conflict he faces is convincing others hi is right about the nature of the magic, but Conn doesn't fully understand how it works or where it comes from.  The answers to those questions took me by surprise and I loved it.

These books are definitely good for fans of magic and mystery.  These are middle grade novels, but also good books to put in the hands of advanced younger readers as well.  Bit (my six year old) has expressed interest in them and I have no problem with her reading them if she wants to.