August 11, 2011
"Don't judge a book by its cover."  An adage any book lover needs to take to heart, in the literal sense.  "Don't judge a book by its title" might be one to consider from time to time as well.  I judged Keturah and Lord Death as simply silly from the first time someone mentioned it.  I snorted with laughter at the title and dismissed it.  If I had seen the cover to go along with it I would have snorted even louder.  Then I read a brief summary from that had me intrigued, so I read.  While not a book I loved, it is not silly as the title made me think it.  It is a tale seeped in folklore and myth, simply told, with layers of potential meanings. 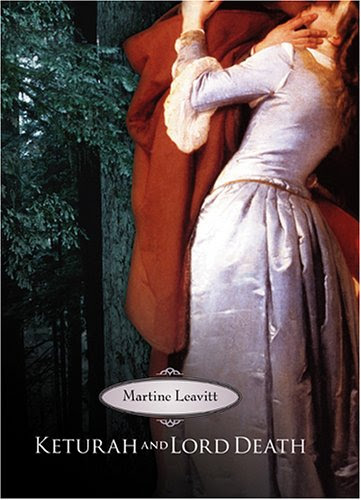 Summary (from book cover):
Keturah follows a legendary hart deep into the forest, where she becomes hopelessly lost.  Her strength diminishes until, finally, she realizes that death is near-and learns then that death is a young lord, melancholy and stern.  Renowned for her storytelling, Keturah is able to charm Lord Death with a story and gain a reprieve-but he grants her only a day, and within that day she must find true love.  Keturah searches desperately, Lord Death hovering over all, until she confronts him one last time in the harrowing climax.*
Like Scherehazade in 1001 Arabian Nights, Keturah is bargaining for her life one day at a time with a story begun, but left unfinished.  She is at an advantage because Lord Death is enamored of her, and she is telling his story as well as her own.  Lord Death's infatuation with Keturah and her role in the book have strong reminders of the myth of Persephone.  Like  Hades, Lord Death is the ruler of the afterlife, cold and surrounded by the dead.  He is not an appealing marriage prospect, although he is a very nice gentleman and not given to abduction and rape like Hades was.  Like Persephone, Keturah is distinctly beautiful.  Persephone, as the daughter of Demeter, is the symbol of rebirth and spring in her myth.  Keturah plays this role as well, bringing new life and hope to her small village.  While invoking ancient mythologies, the book reads like a European folktale and is told in simple, but beautiful language.

As a lover of mythology and folklore, I enjoyed these elements of the story.  Keturah is an interesting character and  I found the conflicts and realizations she is faced with captivating, while unsurprising.  Lord Death was less intriguing to me.  He was made to be so gentlemanly, sacrificing, and long suffering that he was rendered dull.  He was way too nice to be interesting.  Not to mention cold (literally) and very emo.  Not my kind of hero.

When reading this as an original folktale invoking old myth it is an enjoyable read.  There could be more to it though, depending on what the reader wanted to get out of it.  Potential metaphors abound.  I like books that are layered like this and I like authors who are willing to allow their readers the pleasure of discovering the layers for themselves.

I am held back from completely liking this book because of the innocuousness of the conflict.  There is nothing at all sinister about the novel.  Death is appealing, made even more so by his proclaiming there is no hell to worry about, "Each man, when he dies, sees the landscape of his own soul."  (What does that even mean???)  Keturah's struggle is not about choosing one fate or another, but coming to a realization of a choice she already made.  She is allowed to act as a benevolent benefactor to her village, bestowing gifts of life and prosperity everywhere she goes in the meantime.   There is no darkness to the story, it is all sweetness and light.  Without the contrast, the light appears less powerful.
*I didn't find the climax to be at all harrowing.  Rather predictable, and kind of sappy, actually.