August 07, 2011
Released earlier this year Enchanted Glass is the most recent novel by the amazing Diana Wynne Jones.  I devoured this book and enjoyed reading it immensely....until I reached the last page.  My reactions to and feelings for this book are bit muddled as a result.

The left is the U.K. cover (I like it better) 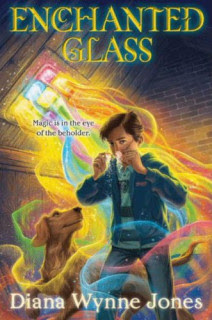 Synopsis (from Goodreads):
When the magician Jocelyn Brandon Hope died he bequeathed Melstone House to his grandson Andrew. He also left his ‘field of care’: an area of strangeness surrounding the land around the house, whose boundary Andrew must walk in order to preserve its power.

Andrew had always loved the house, but he finds owning it a lot more complicated, aside from all the magic. There is Mrs Stock, the tyrannical housekeeper who won’t let him move the furniture and punishes him with her terrible cooking. Just as bad is the obsessive gardener who will only grow giant inedible vegetables. To add to his troubles, twelve year old orphan Aidan Cain suddenly arrives on the doorstep begging protection from magical stalkers, and Andrew’s sinister rich neighbour, Mr Brown, begins to encroach on the ‘field of care’. The one compensation is the gardener’s beautiful niece, Stashe. Things become stranger and stranger until all is made clear with the help of the enchanted glass itself.
In typical DWJ fashion the reader is dropped into the story and is left to figure out the world and magic as the story unfolds.  I love this aspect of her books.  The magic is there, it doesn't need to be explained or over analyzed.  It just is.  The story unfolds slowly and the resolution is a tad rushed, but overall it is engrossing.

The heart of the book is the cast of quirky characters we are introduced to.  There are really two main protagonists, Andrew and Aidan, and which dominates the story might be interpreted differently by different aged readers.  As an adult I thought Andrew dominated it more but a child, identifying more with Aidan, might find it to be him.  All of the supporting characters offer humor and just the right amount of whimsy to the story. Mrs. Stash and Mr. Stash and their domineering, passive aggressive ways are amusing.  Stashe is a strong female but rather obnoxiously bossy at the same time.  Aidan and Andrew both acknowledge the bossiness and put up with it because they like her.  Then there are the imported characters.  Oberon, Titania, Queen Mab and Puck are all in this novel.  My favorite scene, hands down, is the raucous confrontation that occurs between Stashe and Titania.

The book is mostly a humorous, lighthearted story of magic and myth. But...

The End.  I don't want to spoil this for any who might not have read it so this is going to be a tad vague. (ETA:  One of my comments is less vague, avoid if you don't want spoilers.) I might be forever labeled as a stodgy stick in the mud for this, but the reveal at the end of the book disturbed me a great deal.  Not just the nature of the reveal itself (which is disgusting enough if you think about it even a little), but Andrew's reaction to it bothered me to no little end.  I know the book doesn't explore his reaction much and it was intimated he knew that Jocelyn was not an altogether nice person, but some sense of outrage or mild disgust would be a little expected.  I can understand why he wouldn't want to show that outrage to Puck but I would rather have liked to see it as the reader instead of what I was left with.  I may be overreacting to it due to personal experience (similar to the position of Andrew not Melanie) but it left a bad taste in my mouth which is tainting my enjoyment of the book as a whole.  Which saddens me.