Finnikin of the Rock

August 11, 2011
It is not often that you find an author with the courage to completely shift genres.  A brilliant much lauded author of contemporary YA, writing an epic fantasy is far from common.  But then there is nothing common about  Melina Marchetta's writing.  Finnikin of the Rock does not have the pitch perfect tone of her other books.  It is not as lyrical and does not flow with the same smoothness.  It is still an amazing book and it sucked me in like a vortex. 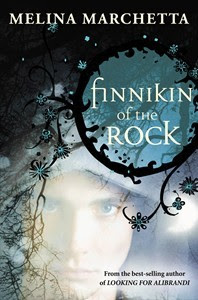 Australian cover on the left, US on the right.
Synopsis (from Melina Marchetta's website)
At the age of nine, Finnikin is warned by the gods that he must sacrifice a pound of flesh in order to save the royal house of his homeland, Lumatere. And so he stands on the rock of three wonders with his childhood friend Prince Balthazar and the prince's cousin, Lucian, and together they mix their blood. And Lumatere is safe. Until the 'five days of the unspeakable', when the King and Queen and their children are slaughtered in the palace. And an imposter king takes the throne. And a curse is put on Lumatere, which traps those caught inside and forces thousands of others to roam the land as exiles, dying of fever and persecution in foreign camps. But ten years later Finnikin is led to another rock to meet the young novice, Evanjalin. A girl plagued by dark dreams, who holds the key to their return to the Land of light...
Despite being a different genre, Finnikin has much in common with Marchetta's other novels.  It begins in tragedy and ends in hope.  The darker sides of life and human nature are not shied away from.  The novel contains a very forthright and stark picture of persecution, racial hatred, rape, slavery, and imprisonment.  There were scenes that tied my stomach in knots.  The characters are complex people with varied motivations, who are not always likable.  In fact, they are often very unlikable.

Finnikin's nation was destroyed, his people displaced, his family ripped apart and his faith lost.  He travels with his mentor from exile camp to exile camp watching his people starve, die of fever, and sit as prey for the mercenary appetites of other country's less noble citizens.  He feels helpless and hopeless.  Yet, he is afraid to hope too much and must be forced into action by Evanjalin, a girl of mysterious background who is ruthless and unapologetic in the means she applies to get what she needs.

I've read several reviewers say they had a hard time connecting to or caring about the characters.  I did not have that problem.  I loved both Finnikin and Evanjalin and hurt for them both in their struggle to unite and save their people.  Evanjalin is less sympathetic as a character because she has already realized who she is and what her role is in her nation's future.  She is willing to risk much to make this come about (one thing in particular was a bit hard to swallow).  Finnikin struggles with who he is and what part he has to play through the entire book, making him easier to relate to.

The book has a slew of secondary characters too.  I can see how one might have a difficult time keeping track of them, especially if one doesn't really connect with the two main characters.  I, again, didn't have this problem.  The secondary characters were just as real and different to me as the Finnikin and Evanjalin.  There were some I didn't like, but I felt I knew all of them.  One thing I really liked is the cast of strong female characters who find their strength in their femininity.

The story has several action scenes and tense moments that sometimes mad me feel like I was drowning and in need of air.  So I appreciated the slower parts of book that focused on traveling, talking, and  plotting.(There was much of all three going on.  It is an epic fantasy.)  The world Marchetta created for the story was very real and understandable, even if it was not completely explained.  I expect more will be revealed as the story continues.


This is exactly the kind of story I love.  Political intrigue abounds.  There is romance, but just enough of it.  There are many great themes explored and I like how Marchetta used her fantasy world to mirror our own, and make more real, to the audience intended, the atrocities that happen to displaced peoples around the world.

Finnikin of the Rock is the beginning of a trilogy but is a complete story in itself.  There is no cliff hanger ending.  Froi of the Exiles is the next book and will take place a few years after the end of Finnikin.  I'm a little nervous about this as Froi was definitely the least likable character in this book.  I didn't hate him in the end but I'm not exactly yearning to discover what becomes of him.  Knowing Marchetta's skills, she'll be able to change my mind.  Froi's story will be released in Australia this fall.  A US release date has not yet been announced.