August 11, 2011
I call the south home but I am not from here. Minus a three year stint in New Mexico I have lived here since I was 16. My parents are originally from Michigan. The places I have the most memories of I lived prior to here were England, southern California and upstate New York. I was little prepared y'all. Things are different here. Wedding are different, funerals are different, life is different. There are things I have come to appreciate about this region I call home:  the availability of sweet tea in restaurants, sweet potato casserole, Mayfield Dairy products, the Blue Ridge Parkway, the beaches, being surrounded by so much history. There are still things that have me boggled about the place: the array of desserts people insist on making from citrus fruits, the need to throw anything edible into a deep fat friar, how slow everyone moves, the entire state of South Carolina. And while I love the history I don't really see the need to cling to it like it is a lifeline and you are about to drown. Also, the famed sweet southern hospitality is a veil of hypocrisy that makes me want to grind my teeth to dust. Which is why I was excited to read Never Sit Down in a Hoopskirt and Other Things I Learned in Southern Belle Hell by Crickett Rumley. I connected with Jane's character immediately and settled in to enjoy myself. The book is a very fair portrayal of the region, good, bad and indifferent. 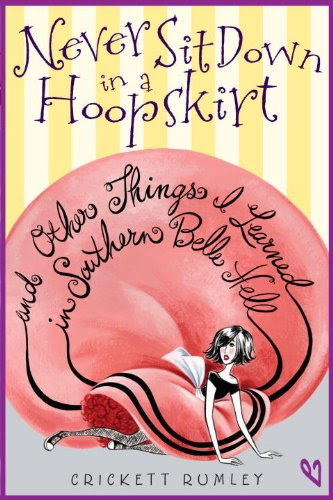 After being kicked out of 13 boarding schools in five years Jane Fontaine Ventouras is sent home to Bienveille, Alabama to live with her grandmother. When Jane's grandmother asks her to try out for the Magnolia Maid Pageant she agrees, knowing there is no way she will be chosen even though she has the pedigree. She is too rebellious and wears too much black eyeliner. Except this year the Magnolia Maids are going in a new direction and she is chosen, along with an African American girl and a country girl, to join the two more traditional candidates in the court. Caught up in a summer filled with etiquette lessons and billowing skirts Jane is not entirely pleased, but finds her sister Maids might be exactly what she needs, and that she might be what they need.

Jane's voice had me from the beginning. She is intelligent yet sounds genuine. And she is funny. Not sarcastic, funny. (Well, a little sarcastic but it is not overkill.) The entire book is funny especially if you know the south. She pretty much had me hooked for good on page 29 with this:
"Oh no. He did not. But yes, he did. Mr. Walter had just uttered the dirtiest six letter word in town. Change. Southerners tend to have a real hard time with that word. Don't get me wrong, we do appreciate certain kinds of change: bigger Walmarts with grocery stores inside for easy one-stop shopping. Fancy, new subdivisions out in the county, far from those darn city taxes. Modern new churches with rapidly expanding memberships. But when push comes to shove, if the change is substantial, forget it. People who don't understand us would like to say it's because we're backward or stupid or lazy. But really, it's because of the ancestors. It's as if everybody thinks all our dead ancestors, back to the ones who showed up here from France and Spain to colonize the joint, are sitting up in the afterlife watching our every move, fixing to send hellfire and damnation down on us if we dare deviate from the way they set things up for us. We fear that more than we fear the Supreme Court, the National Guard, and the evil guy from Saw all put together. For that very reason it is not uncommon for a young lady to hear things like, 'Your great-great-grandfather founded the Presbyterian church in 1785. No, you cannot take yoga. It's heathen.'"
This is such an accurate summation it comes as little surprise to discover author, Crickett Rumley, is from the south. Notice how Jane is referring to all this though, how she is using "we". She includes herself in this. Her town, her heritage, is important to her even if her time away from it has left her questioning it in a way she never would have had she not been banished. Jane's anger and rebellion are directed toward her father who, after the biggest parental overreaction in history, took her away from the home and grandmother she adored. Most of Jane's rebellious antics take place prior to the start of this story. She just has a couple left over souvenirs, a smoking habit and a tattoo that has the Magnolia Maid seamstress coming up with inventive ways of sewing an off the shoulder gown. Jane also has a big mouth that gets her in trouble. She is very vulnerable though and this is shown when she is confronted by the solicitude of those in the town who remember her. The fake solicitude that is the veneer on the ugly gossip spread about her. She is a very sympathetic character and it is easy to relate to her emotions. Her fellow Magnolia Maids are also well written. They all have distinct personalities and stories of their own.

The book's one major flaw in my opinion is the heightened ridiculousness of some of the scenes. It was almost as if the author couldn't decide if she was writing satire or a humorous look at life. The book is mostly the latter, but there are a few scenes that fall into the former category making them seem a bit too much. However, I mostly enjoyed how realistic the portrayal was of the girls, their relationship, the region, and teenage life in general.

There is a romantic thread very loosely woven through the broader fabric of the story. So loosely woven there isn't even any kissing (except a flashback to Jane's very first kiss). I liked this because Jane's crush, Luke, was her best friend in her former life in Bienville and reconciling with him is part of reconciling the new Jane with the old life she had and the one she is now building.

Mostly this is a story about Jane and the other girls. It is a lovely read about friendship, sisterhood, and finding and accepting your place in the past and the present.

For Concerned Parents: There are a couple incidents of underage drinking in the book (one of which gains the girls a tour of the city jail) and there is also some discussion of sex.