August 11, 2011
Looking at the cover of The Kneebone Boy by Ellen Potter you might assume that it is a fantasy.  I sure did.  Fortunately that assumption was corrected for me before I read it or it might have been rather disappointing.  It is straight up contemporary fiction.  It's mysterious and strange (in a good way) contemporary fiction with a wonder of its own.  It reminded me of E. Nesbit's novels, but modern and with a mildly gothic feel. 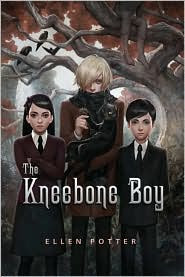 Synopsis (from Goodreads):
Life in a small town can be pretty boring when everyone avoids you like the plague. But after their father unwittingly sends them to stay with an aunt who’s away on holiday, the Hardscrabble children take off on an adventure that begins in the seedy streets of London and ends in a peculiar sea village where legend has it a monstrous creature lives who is half boy and half animal. . . .

From looking at the cover you might also come to the conclusion that those kids are creepy an bizarre.  They are not creepy, but they are a bit bizarre.  Otto doesn't speak (by choice), Lucia is uncomfortably forthright and Max is super smart and likes to sit on the roof.  This is their story and I have a great love for books about siblings who adventure, suffer, and succeed together so I was expecting to like the Hardscrabbles.  I was not expecting them to earn a place in my heart next to the Bastables, Pevensies, and Penderwicks, but they have.

The adventures of the Hardscabble children will captivate young readers.  What child doesn't love the idea of being on their own in a big city?  Or living in a miniature version of a castle complete with its own carousel?  Or finding and exploring a secret passageway?  Or brilliantly outwitting all the grownups?  These kids argue and fuss with each other like any other group of siblings.  There are characteristics in them all kids could identify with, but at the same time they are so different, and having such a strange adventure that their story is engrossing.  It is the perfect combination.

I really enjoyed the style of the writing here as well.  From the beginning it pulls you in:
"There were three of them.   Otto was the oldest, and the oddest.  Then there was Lucia, who wished something interesting would happen. Last of all was Max, who always thought he knew better.  They lived in a small town in England called Little Tunks.  There is no Big Tunks.  One Tunks was more than enough for everyone."
This is one of those books where the story is told in third person by a first person narrator who provides commentary for the reader.  Normally that type of narration drives me nuts, but it worked for me in this book, probably because the narrator is one of the children and not some unknown supercilious adult.  The narrator's identity is meant to be secret, as this is the story of all three children and not just one.  The narrator, not necessarily agreeing with this edict, gives the reader plenty of information to make an accurate identification.  I absolutely love the narrator's wit, such as:
"They hooted and laughed and staggered around like a pack of drunken idiots as the Hardscrabbles walked by.  If I ever become like this when I am a teenager, I hope someone smothers me in my sleep."
and
"Here is my most important message to you:  All great adventures have moments that are really crap."

The ending is a bit rushed, which I'm noticing a lot in books lately.  It is described in the book as bittersweet and I think young readers would agree.  As a mother, I found it to be really really sad.  Don't worry, everyone, including the cat, is alive and well in the end.  Happy even.

If you know a kid who loves adventure, humor, and mystery then put this book in their hands.  If you are a lover of those things yourself, you should read it too.