August 07, 2011
My adventures in the world of Chrestomanci continue.  I am delighted that I chose now to read these books.  They just fit so well with the month and season.  There is no denying they are great fun no matter when you read them but there is something quite festive about reading them in October. 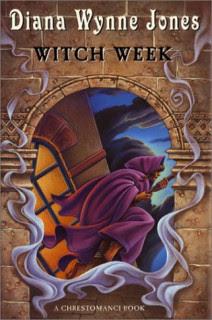 You can, again, get both novels in a combined edition (I really like this cover):

In this multiple parallel universes of the Twelve Related Worlds, only an enchanter with nine lives is powerful enough to control the rampant misuse of magic -- and to hold the title Chrestomanci...

Witch Week takes place in a world that is a part of series 12.  There is magic in this world, a lot of it.  It is, however, illegal and witches are still burned at the stake.  At a boarding school for children who are mostly witch orphans an anonymous note is found among the composition books of 6B stating "Someone in this class is a witch."  This worries some of the students including Charles Morgan who has just discovered he has magical powers and Nan Pilgrim who is named after and descended from the most famous witch in history.  A number of bizarre incidents occurring around this class lead to inspectors being called in.  In an attempt to get help a few students use a spell that is supposed to bring assistance.  It is very old and they don't know what to expect.  What they get is a well dressed arrogant enchanter going by the name of Chrestomanci.

The kids in this book are from the age group I taught.  Diana Wynne Jones brilliantly rendered the group dynamics of a class of 11 year olds.  I could actually match names of former students from each year I taught with the characters.  The interactions of these students make this volume funnier than any of the Chrestomanci books I've read yet.  This book also has Chrestomanci at his snarky, elegant, arrogant best.  Two of the girls manage to fall in love with him on sight.  This was the quickest read of the lot so far and I thoroughly enjoyed every minute.

The Magicians of Caprona takes place in the same world Chrestomanci lives in but in the country of Italy, which, in this world, is still divided into small city states.  In the state of Caprona there are two families with amazing magic abilities who bitterly hate each other, the Montanas and the Petrocchis.  (I was sorely tempted to right the summary of this to the opening lines of Romeo and Juliet but I have restrained myself.)  The magic both houses have put up as protection over the city are beginning to fade.  The surrounding states are gearing for war.  Chrestomanci arrives from England eager to help but restrained in how far he is permitted to get involved as a government employee and warns both families an unknown enchanter is working to undo Caprona.    Amidst all this young Tonino Montana goes about his daily life a little frightened of the future.  He feels less important than the other members of his family because he is slow at learning magic.  His only real talent is his ability to understand the cats.  When he and Angelica Petrocchi are abducted, things go from bad to worse as the two houses each blame the other.  Tonino, Angelica and their siblings must overcome old prejudices and hatred and work together to unleash the power of the Angel of Caprona and save their city.

This has been my least favorite one so far but I still liked it.  The beginning was a bit slow as there are a lot of characters and it took a while to set  up the plot.   Once the action was underway the book was exciting and great big magic began happening all over the place.  I really liked Tonino's character and thoroughly enjoyed the side plot of Rosa and Marco.

My greatest quibble with these two books is there was no Millie.  I really like her and want to see more of her.  This is why I am anxious to get into Conrad's Fate.  I know from the plot summary she's in that one.