Into the Woods and Up a Tree

August 12, 2011
A couple of weeks ago Betsy at Fuse 8 wrote a post on the Fantasy worlds of 2011 and their desirability as a destination. It had me thinking about the fantasy worlds that I wanted to be a part of as a child. I thought about writing a post right away but school preparations and other things got in the way. Eva at Eva's Book Addiction was able to write one though and I like what she had to say about the desirability of any Fantasy world:

"Most of those magical lands just aren't SAFE!  From Oz to Wonderland, they're brimming with nasty characters, treacherous landscapes, and tricky tests of character.  Sure, natural-born Gryffindors live to push the boundaries, conquer bad guys, and hurl themselves in the path of danger, but we Hufflepuff/Ravenclaw hybrids crave a quiet life."
As a child (and fellow Hufflepuff/Ravenclaw hybrid) I completely agreed with this. The fantasy worlds I wanted to visit were pretty tame. And as an adult the ones I would like to visit I would in no way want to play a crucial part in. I would just be there to observe and soak it all in. 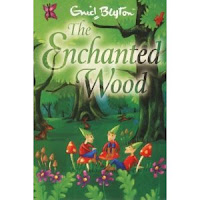 As a child the first world that caught my fancy was Enid Blyton's Enchanted Wood. It doesn't get much tamer than that. (See book cover). Sure, there was an occasional run in with an angry brownie, and there was a need to dodge the dirty water that Dame Wash A Lot would send cascading down The Faraway Tree when one was climbing it, and  sometimes there was a rather nasty land at the top of the tree that you wanted to stay away from. For the most part it is as delightful as a fantasy world can get though. An enchanted wood with a huge tree in the middle, full of engaging creatures (and some grumpy ones) to befriend, different magical worlds always at the top ready to explore, and a giant twisty slide running down the middle of the tree as a way to end the day (after you've had tea of course). What's not to love? Yes, I outgrew it quickly, but for a couple of years it was the only place I wanted be.
Then there was Narnia, except not really Narnia but Archenland. I am all about The Horse and His Boy. Other than that pesky little Calormene invasion that was so neatly taken care of in the end, Archenland was a pretty peaceful place that benefited from an alliance with Narnia. Nice place to settle down and be near the magic without tripping over it.
As an adult reader I have been enticed by Hogwarts, of course. So much fun to be had there, and less dangerous if you are a Ravenclaw type.
Then there is the world Megan Whalen Turner has created in her series. It is beautiful and populated by people I love and would want to observe at close range. Not too close though. If there I would take great care not to draw the attention of the amazing Gen or his Queen. As much as I love them both they would just make me feel like an idiot if  I actually had to come in contact with them. And I don't particularly enjoy that feeling.
Bu all that is if you are polling the me who inhabits the real world. If you poll the me I am when I'm reading, I have different thoughts on the matter entirely. When I am reading I can imagine myself the hero and actually convince myself the world would be a great place to be, no matter how dark or scary. Fantasy worlds often are dark and scary places. Lands on the brink of war, under fierce enchantment, in need of heroes. That is the wonderful thing about fantasy. When you read fantasy you can imagine that you are the type who can fight an evil witch or save your country. Fantasy never dies out because it renders our own scary world a little easier to deal with. Like C.S. Lewis said: "Since it is so likely that children will meet with cruel enemies, let them at least have heard of brave knights and heroic courage."