Enola Holmes Gives Famous Brother a Run for His Money

August 07, 2011
I love mysteries, historical fiction and quirky twists on old classics so I was very interested in reading the Enola Holmes Mysteries when I discovered their existence.  This series of six books by Nancy Springer follows the adventures of Sherlock's much younger sister, Enola. I just finished reading the first one: 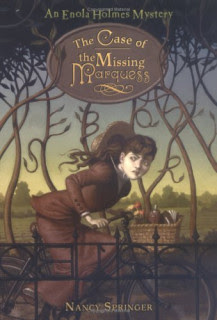 "I would very much like to know why my mother named me 'Enola', which backwards, spells alone.''  Thus begins the story Enola tells of how she came to be very much alone.  Growing up on her father's estate after his death Enola is left to her own devices with little supervision from her mother and no contact with her much older brothers. On her 14th birthday her mother goes missing and Enola calls in help but finds it not to her liking.  Unraveling the clues to her mother's disappearance Enola discovers the tools to aid her own escape from being sent to finishing school.  On the way she is embroiled in the disappearance of a missing noble.  In order to  maintain her newfound independence she must outwit the villains, Scotland Yard and the cunning all seeing eye of her brother Sherlock, the  most famous detective in the world.

I really enjoyed Enola.  The book is a first person narrative from her point of view.  At the beginning she is scared and uncertain.  However, she proves to have a brilliant mind capable of strategy and great deception.  She learns a lot about life and human nature over the course of this one book and, because she is observant and processes information quickly, she is able to adjust herself accordingly and quickly.  She is a girl who fights when she has to but mostly  uses her wits to see her through.  The book's supporting characters are also well written.  Even the missing marquess, who is in the book very little, is given surprising depth (I really hope he shows up again in later volumes).  I very much enjoyed the portrayal of Sherlock as well.

The first half of the book covers the mystery of Enola's missing mother and helps the reader to become acquainted with Enola and the world in which she lives.  The other half of the book is more of an adventure story involving Enola's escape from the dooms of finishing school and her entanglement with the missing marquess.  The whole thing is  interesting, paced well and Enola's observations on life make for humorous and quick reading.

Nancy Springer did a wonderful job describing Victorian England.  From the docks and slums of London's East End to the ridiculous practices of the upper class, this book has it covered.  There is not a shiny gloss put over anything here.   The prostitution, poverty and lawlessness of the East End are mentioned.  There is an allusion in the prologue to the work of Jack the Ripper (the book takes place in 1888).  The type of clothes women of the upper class had to wear and the restrictions put on girls of this time are well detailed.  The popular view of women as witless and fragile is espoused by Sherlock and his brother several times.  Enola's father was a rationalist and Darwin is mentioned as one of his favorite writers.  Enola's mother is active in the struggling movement for women's suffrage.  Pretty much every angle and aspect of  Victorian society is given a nod to in this book and it is done without ever being didactic.

This book is marketed for middle grade readers but is enjoyable for any age.  Teen and adult readers will enjoy it as well, especially if they like the mystery genre and are familiar with the character of Sherlock Holmes.  Advanced younger readers will probably enjoy the mystery and adventure elements, but  a lot of the rest of it will probably go over their heads.  There are intense moments when Enola is held captive some younger readers might find scary.

I am very much looking forward to reading the other books in the series.