August 07, 2011
My journey through the 12 Related Worlds is complete.  I finished the last of the Chrestomanci novels this afternoon.  Of course, I will be going back for many return trips in the years to come.  This is one of my favorite series now and I enjoyed the final two installments as much as I enjoyed the first two books in the series. 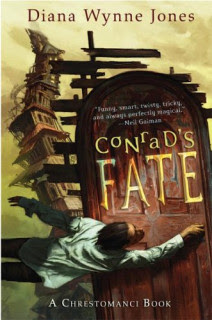 And again, you can get them combined in one book:

In the multiple parallel universes of the Twelve Related Worlds, only an enchanter with nine lives is powerful enough to control the rampant misuse of magic—and to hold the title Chrestomanci. . . .

Conrad's Fate takes place a few years after the conclusion of The Lives of Christopher Chant so Gabriel de Witt is still Chrestomanci and Christopher is still a young enchanter in training.  This volume takes place in series seven and is told in first person by a young man named Conrad.  Conrad has been ordered by his  uncle to take on the job of a servant at Stallery Mansion.  There he is supposed to complete a job to counteract his bad karma left over from a previous life that his uncle insists he has.  While traveling to interview for the job he meets Christopher.  When they are both hired, Christopher confesses he is only there temporarily and is only in series seven to find Millie, who has disappeared somewhere around the house.  As Christopher and Conrad help each other with their new jobs and their individual quests they discover Stallery Mansion is a mysterious place where different probabilities seem to be stacked one on top of the other.  Millie is clearly trapped in one of the probabilities but as someone in the  mansion keeps shifting the probabilities it becomes increasingly more difficult and dangerous to find her.

I really enjoyed this book mainly because of its snapshot of Christopher as a teenager and his relationships with both Conrad and Millie.  Since Lives, Christopher has further developed his supercilious and sarcastic personality.  He has also learned how to focus and use his immense gift of natural charm.  He and Conrad become friends easily and this lends an interesting perspective on Christopher's character.  Conrad is in turn annoyed, awed, amused and thoroughly disgruntled with Christopher.  He discovers through a conversation with Millie that she feels much the same way about Christopher's sometimes overbearing personality.  It was interesting to see Christopher, who had such relational issues in Lives, develop such a close and trusting friendship with someone so quickly.  Conrad himself was a great narrator and interesting in his own right.  Christopher and Millie don't have many scenes together in this book but we are given a glimpse as to how their relationship morphed from what it is in Lives to what it is in Charmed Life.  Diana Wynne Jones is one of those writers who can say a lot with few words so, despite not writing any romantic scenes, the story managed to convey, with a few well placed sentences, the depth of  Christopher and Millie's feelings for each other.

The Pinhoe Egg takes place about one year after the end of Charmed Life and shows how Cat is settling into life in the Castle as part of the Family.  It also tells the story of the Pinhoe family who practice magic practically in the Castle's backyard and see it as their duty to keep "The Big Man" from finding out about them and "interfering".  The lives of the Castle Family and the Pinhoes are becoming increasingly entwined though, and when Cat meets Marianne Pinhoe there is no stopping the inevitable confrontation from coming fast.  Cat informs Marianne at their meeting that she is a strong enchantress and should not let people order her about but be courageous.  Marianne gives Cat an egg kept in her family's attic that they find with a very strong "Don't Notice" spell on it.  The Castle family is curious about the Pinhoes ad their special and different kind of magic.  The Pinhoes are stubborn and small minded and enraged with Marianne for causing trouble.  Add to that the family feud that has just broken out between the Pinhoes and the neighboring family of witches, the Farleighs, and things are tense, to say the least.  Then there are the mysterious creatures that Cat finds bound in a strong spell in the forest and the mysterious man living with them.

There is a lot going on in this book, but it is never too much.  I adored all the new characters and the antics of the Pinhoes and Farlieghs were hilarious.  Christopher manages to be just as splendid as ever and fires off some of his best sarcastic comments yet.  Millie, again, is the perfect foil for Christopher and is impressive in her abilities to manage him, take care of the Castle and supervise the education and care of four active children, not to mention caring for the creature that comes out of the egg.  It's a good thing she is such a powerful enchantress herself.   Cat emerges in this story as a character truly worthy of being the next Chrestomanci.  He is now mostly free from the insecurity and bitterness that he wrapped himself in when Gwendolyn was overshadowing him in Charmed Life.  He is truly the hero of this story and I really enjoyed his character so much more this time.  Marianne is a great addition to the cast of characters, and the one I have liked the most outside of the originals introduced in the first book.  She is powerful, feisty and does not back down from what she knows to be right.  I am rather sad this is the last volume as I would like to see her character developed more.  Christopher is going to have his work cut out for him training both Cat and Marianne.

What I enjoyed most about these two volumes, particularly The Pinhoe Egg, was how they contrasted Christopher's story and Cat's story.  Conrad's Fate gave further insight into Christopher's relationship with his predecessor, Gabriel, and the difficulties of that relationship.  The Pinhoe Egg demonstrated Christopher was working very hard to not make the same mistakes with the children under his care.  His relationship with Cat is very different than the one he and Gabriel shared.  At the same time, Cat was as disdaining of Christopher in the beginning as Christopher was of Gabriel but this final book shows Cat relying on and caring for Christopher in a way Christopher never could with Gabriel.  The difference between Gabriel's response to the concerns of Christopher and Millie and Christopher's response to the concerns of Cat are highlighted clearly when the two books are read together.